In each situation, there may be an opportunity to minimize, or even eliminate, Canadian taxation of the income on the inheritance, resulting in significant savings to the Canadian beneficiary over time.

Under Canadian tax rules, if your client inherits a gift of capital outright under a will, no tax is generally paid on the inheritance itself. But if your client is a Canadian resident for tax purposes, the ongoing income on the inheritance is taxable to them. Likewise, if the gift is by way of a trust resident in Canada, the trust will pay tax on the income (or the beneficiary will, if the trust elects to allocate the income to the beneficiary).

With proper planning, distributions from a trust will generally be considered to be tax-free if:

Further, income from such a trust under a will will not be taxable in Canada if it is not paid out to a Canadian resident beneficiary.

As a result, it is possible to set up the trust in a low-tax jurisdiction outside Canada, where there may be little or no tax payable on the ongoing income. The terms of the trust will generally require that accumulated unpaid income becomes capital of the trust.

In the appropriate circumstances, this planning idea may be worth considering, particularly where large sums are involved. A corporate trustee and/or persons resident in the low-tax jurisdiction would usually be named as trustees of the trust. The costs of maintaining a trust, including any trustee and administration fees, are relevant when considering whether this planning meets a client’s objectives. However, where it does, it can provide substantial tax savings over time.

Conversely, there are many tax considerations that arise when a Canadian client’s estate has foreign beneficiaries.

Upon the client’s death, tax may be levied on the estate (or on the deceased) or, less commonly, on the beneficiary. Tax is based on such things as citizenship, domicile, residency and the location of inherited assets.

Most jurisdictions impose some type of death, succession or estate tax. Alternatively, a small number of jurisdictions (including Canada, Australia, New Zealand and Denmark) impose a capital gains tax on death to the gain in the value of the deceased’s property. Deferral opportunities for this tax may exist, such as a spousal transfer.

A mobile client, therefore, may face double or even triple taxation, including taxation by multiple jurisdictions and/or in the hands of different taxpayers. Few tax treaties provide for relief against double taxation on death with respect to gift or inheritance taxes, although unilateral measures may consider such double taxation.

Notable exceptions are the Canada-U.S. and Canada-France tax treaties. However, even where there are provisions for relief, the situation may be complicated if the identities of the taxpayers and/or timing of the tax liabilities differ between jurisdictions.

For example, there is a credit mechanism available under the Canada-U.S. tax treaty to avoid capital gains tax and estate tax being paid on the same assets. It is important they arise at the same taxpayer level; otherwise, there can be a mismatch. If, for example, there is a trust, the U.S. rules, depending on the type of trust, may levy estate tax at the level of the deceased settlor of the trust. But the Canadian rules might treat the trust as a separate entity, with the result that capital gains will not arise on the settlor’s death against which the U.S. estate tax can be credited.

Advisors must understand how foreign taxes can impact the administration of an estate, even one that is purely domestic but has foreign beneficiaries. Certain countries impose an inheritance tax where the beneficiary pays tax based on the value of the inheritance received (see “Selected countries with inheritance taxes”).

As a result, advisors should find out whether the testator wants the estate or the beneficiary to bear the burden of inheritance tax. This important step ensures the client’s objectives are carried out and avoids family disharmony. 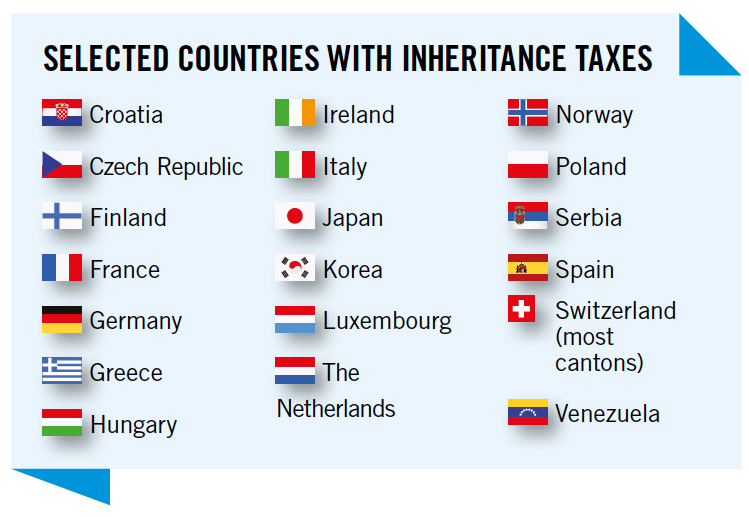 How to plan for cottage succession

How can you incorporate ESG into portfolios?

Canadian pensions were up a median 5.2% for the quarter

The idea of a “private” trust will slip from the vernacular in 2021, as the government gains new information

Powers of attorney for the mobile client

Preventing estate problems when a client lives in multiple jurisdictions

An overview of major changes impacting Canadians with U.S. connections

Opportunities for growth lie ahead