In May, a record 67% of India’s population voted to re-elect Prime Minister Narendra Modi, charismatic leader of the Bharatiya Janata party, in a landslide victory. While Modi’s Hindu nationalist government continues to raise concerns among those who fear for the country’s secular roots, his rise to power in 2014 was largely based on his image as an economic reformer.

The government’s mantra of “reform, perform, transform” was reflected in its budget released in July, which outlined plans to accelerate economic reforms and have India become a US$5-trillion economy by 2024. India’s economy now stands at US$2.7 trillion and is the world’s third largest in terms of purchasing power parity, after the U.S. and China.

Head of government: Prime Minister Narendra Modi (since May 2014)

Citizenship: At least one parent must be a citizen of India

International students from India are contributing to Canada’s G7-leading population growth. Sunit Paul, partner, Canadian tax at BDO in Calgary, has noticed the trend. “I see so many youngsters [from India] travelling to Canada for studies,” she says. “When I speak to some of them, the intent is not to go back.”

The student influx is good for Canada’s economy, and presents additional planning considerations for advisors who will later serve this demographic. A typical scenario would be a client inheriting property in India—a distinct possibility as students typically come from well-to-do families, Paul says.

Vikas Saida, a financial advisor at Raymond James in Mississauga, Ont., asks clients with foreign property the following questions: Does the property have liens or tax-filing requirements that are handled by a licensed tax advisor in Canada as well as India? Is legal documentation being maintained? Is the property held for sentimental value, or does it provide rental income? The latter would require tracking income and expenses, and a local property manager, which should be arranged before leaving India, Saida says.

At death, worldwide assets are deemed disposed of at fair market value (FMV). To determine the capital gain or loss on the property, the FMV and cost are required. Ascertaining the FMV could be challenging for executors since the property is in a foreign jurisdiction, Paul says. And clients typically don’t document the cost, which would be the FMV at the time of the inheritance.

Paul suggests clients get documentation in place during their lifetimes, or consider selling or transferring title if, for example, their children plan to return to India. As with any Canadian resident, advisors should ensure the client’s estate can cover any tax liability at death, she adds.

For business-owner clients whose beneficiaries live in India, succession planning becomes an issue. Paul notes that a client’s private company shares are deemed disposed of at death, and if the new owner were a non-resident, the business would lose its status as a Canadian-controlled private corporation, with consequences that include loss of the small business tax rate.

Many of Saida’s clients have parents in India, so he discusses with them the need to establish a support structure in India, such as family or friends, in case of financial or health emergencies.

China and India accounted for more than 40% of global economic growth in 2018 (in purchasing power parity terms) as a result of urbanization and a growing middle class. About 53% of India’s population is expected to live in urban areas by 2050, compared to about 33% in 2015, resulting in increased consumption. Emerging markets (EMs) currently account for half of all global consumption, and are forecasted to account for two-thirds by 2030, a Sun Life Global Investments white paper says.

India and other EMs also tend to have high savings rates, which means citizens have capital to fuel the economy in the future. India’s average savings rate as a percentage of gross national income is about 18% compared to Canada’s roughly 2.4%.

As consumption growth extends to growth in education spending, India’s economy will continue to transform from agriculture to manufacturing to technology. The country is second only to China in its number of graduates in science, technology, engineering and mathematics (2.6 million grads in 2016 compared to 568,000 in the U.S.).

Income: Tax is imposed on business/trading income, passive income and capital gains at a standard rate of 30%

Capital gains: Same as for corporations

Interest: Generally, a 20% withholding tax applies when interest is paid to a non-resident on a foreign currency borrowing or debt, and 30% applies in some cases. Withholding tax on interest is 5% when paid to a non-resident on specific borrowings in foreign currency and on investments made by a qualified foreign investor in a rupee-denominated bond of an Indian company, or in a government security.

Inheritance or gift tax: None 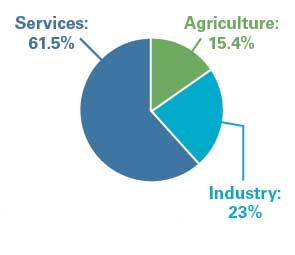 IMF predicts global economic growth over the next two years

OSC head to step down

Maureen Jensen, chair and CEO of the OSC, will leave the job in April