Clients with defined benefit pension plans may reach a point where they must decide whether to take the pension or commuted value.

While there are numbers involved, the decision usually incorporates factors that can differ for each person. It’s our job to walk clients through all those factors so they can make an informed, appropriate decision.

Robert is a 50-year-old former teacher now working in sales and making $90,000 a year. His investment assets are as follows:

He has two choices for his teacher’s pension:

Robert has no RRSP room available. He’d like to keep working until he’s at least 60 years old and would consider deferring retirement to age 65, if necessary. He’s a moderate-risk investor and is meeting with you to review his situation and decide which option is best.

Step one: Run the numbers

The first thing you and Robert want to understand is the financial impact to his retirement income if he takes the pension versus the commuted value. To make this an apples-to-apples comparison, compare retirement income starting at 55 (the age the pension must start). The analysis should show three things:

Robert has stressed that he wants to retire comfortably. This should be quantified by projecting after-tax retirement expenses. By putting a dollar figure on a comfortable retirement, we can see if Robert meets this income need under the pension or the commuted value. We can also see how significant the pension income is in relation to his overall retirement income.

Now it’s time to provide Robert with retirement income projections based on retirement ages of 60 and 65. For the pension scenario, the first calculation should provide the projected pension income throughout Robert’s retirement, regardless of when he decides to retire. We could look at investing the pension income between 55 and 60, or 65, to try to minimize taxes for the years he’ll be working and receiving the pension. With earned income during those years, he’ll accumulate new RRSP contribution room, which he could maximize to reduce taxes. His TFSA contribution limit can also be maximized to reduce income taxes on future income and on investments held within it.

And our projection cannot accurately predict income for every year of his retirement (about 25 to 35 years). What if the markets experience negative returns (which is likely over a 30-year-plus time horizon)? Is Robert prepared to bear this risk if he takes the commuted value?

While the commuted value provides Robert with the ability to determine when he will start drawing an income, this flexibility has limits. When payments are initiated in a locked-in plan (typically after conversion to a Life Income Fund), there is both a minimum and maximum payment. The maximum payment caps how much can be withdrawn annually. The federal, and some provincial, pension legislation allow the unlocking of funds beyond the maximum payment. The options vary by legislation, and criteria must be met before funds can be unlocked. As Robert’s advisor, you must review these options with him.

Next, consider longevity. If outliving money is a concern, that bodes well for the pension option, since longevity risk rests with the pension plan. If longevity doesn’t run in the family, the commuted value may be preferred. Robert tells you that his mother died at 68 from an unknown illness and that his father, currently 77, has had a heart attack and cancer. However, we don’t know ultimately when our time will come, so, if the commuted value is taken, Robert will assume the longevity risk.

Hand-in-hand with longevity are estate considerations. Robert currently doesn’t have a spouse and has indicated that his children from his first marriage will receive an inheritance funded by insurance. If he doesn’t have a spouse when the pension payments begin, he’ll have to choose a single-life pension option or a joint-and-survivor option with a dependant named as nominee.

If Robert has a spouse when his pension payments begin, he must choose a spousal pension option, unless his spouse waives the right to a survivor pension in writing. The survivor option allows for a pension to continue to the surviving spouse when Robert dies (or his pension continues to him if his spouse predeceases him). For Robert, he’s found there are three choices:

Robert’s future pension amount can be adjusted to reflect the chosen pension option. So, it’s important to review all pension options, and understand the costs and benefits associated with each.

With the commuted value, Robert can bequeath any remaining assets to his chosen beneficiaries. If he has a spouse, the spouse is the beneficiary of the locked-in funds, unless the spouse declines in writing. The question then becomes: How much money will be available for beneficiaries at Robert’s death? This depends on a number of factors, including investment returns, income drawdown and Robert’s age at death. In other words, there could be no assets at death.

Finally, as an advisor, you stand to gain new assets and revenue if Robert takes the commuted value and invests with you. The pension plan could also benefit financially from a decision that Robert makes. Explain these potential conflicts to Robert clearly.

Despite the volume of information Robert has already provided you, it’s clear that you must obtain more information from him and the pension plan to help Robert make an educated decision.

Our role as advisors involves helping clients like Robert understand the financial implications of taking either the pension or commuted value in the context of considerations such as income flexibility, longevity, estate planning and the financial condition of the pension plan. If we take time with clients, we can help them make informed decisions for long-term financial well-being. In this way, we become the advisors that clients need now and throughout retirement. 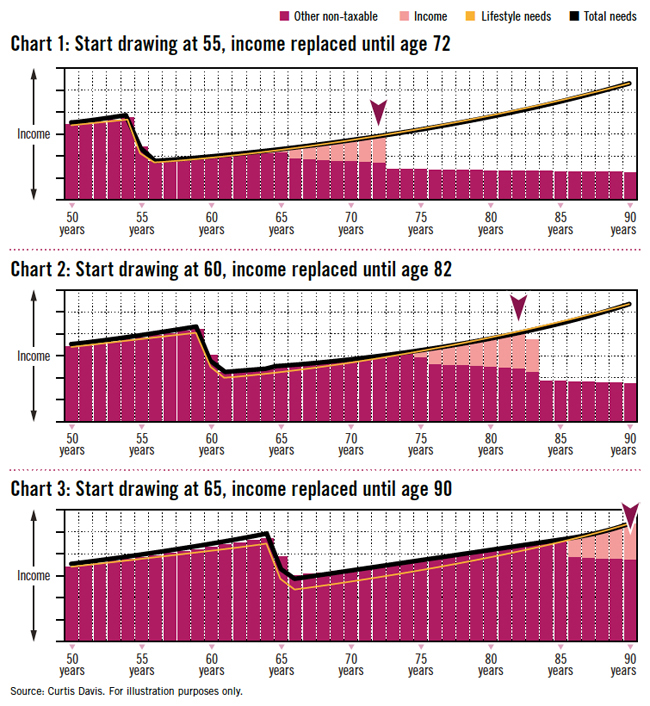 How to unlock a life income fund

Spousal RRSPs: What you need to know

Make sure clients don’t run afoul of the attribution rules

Three things to do before tax season

Now is the time to review plans jolted by the pandemic

Help this client and her daughter maximize their savings account