This article appears in the June 2020 issue of Advisor’s Edge magazine. Subscribe to the print edition, read the digital edition or read the articles online.

Amid these challenging conditions, central banks and governments around the world have committed to expenditures ranging from 8% to 20% of GDP, pushing public debt levels into the stratosphere.

What risks could result from such high debt levels, and what are the implications for investment policy today?

Learning from past pandemics

To glean insights into the possible economic consequences of Covid-19, a Federal Reserve Bank of San Francisco working paper examined the medium- and long-term effects of 15 pandemics, ranging from the Black Death in the 14th century to the 2009 H1N1 outbreak.

Figure 1 shows how the natural rate of interest responded after the pandemics ended (defined as a smoothed risk-free rate plus a high-quality bond return premium). The figure shows pandemics have been deflationary for decades following the event, while wars have been inflationary. 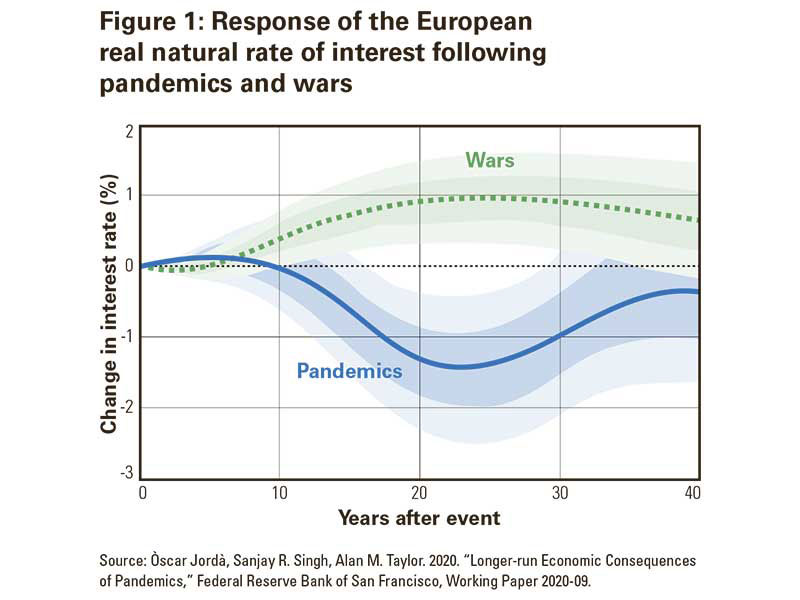 Recessions are usually deflationary, because low output and low demand temper prices. The Federal Reserve Bank of St. Louis developed a measure to quantify the probability that the U.S. inflation rate will fall below zero. During 2008-2009, the probability rose only briefly. On April 30, the probability sat at 3.8%, but is estimated to move sharply higher as new statistics are released.

For instance, relief funding from the U.S. Coronavirus Aid Relief and Economic Security Act, plus announced bond sales, already exceed US$6 trillion and could push the country’s debt-to-GDP ratio to over 120% without tapering. Compare that to the ratio from 2008 through 2010, when three rounds of quantitative easing (QE) elevated the ratio from 60% to 100% by 2015.

Today, monetary authorities are stumped by what causes inflation. The inflation of the 1980s was the result of higher oil prices and increasing economic growth relative to the money supply, not money supply growth alone. The US$25 trillion in U.S. national debt today has funded fiscal spending in an unconstrained manner for decades — as has Canada’s $1.8 trillion without inflation. This relative debt would depreciate most currencies but the U.S. dollar remains the reserve. The loonie, meanwhile, depends primarily on energy prices.

How likely is the economy to return to the pre–Covid-19 conditions of 2% inflation and 4% nominal GDP growth? It’s hard to say. Reorganizing supply chains to reduce dependence on China and India will take time and may be inflationary. More fiscal spending could also be inflationary.

But stimulus depends on how funds are administered. Businesses are unlikely to invest in capital spending without greater visibility and/or tax incentives. Consumers will be cautious until personal safety and employment certainty are evident, so stimulus may be muted. As a result, post-pandemic deflation is likely.

If your clients are investing to achieve goals within the next two years, then selling to have the cash or holding short-term liquid instruments always makes sense. For longer-term goals, consider sectors that will grow through a deflationary environment, like technology companies. However, having cash in reserve makes sense until the nature of recovery is clear or there is another market washout.

Waiting on a recovery that’s already priced in

Why the drop in business insolvencies isn’t good news

Waiting on a recovery that’s already priced in

Investors should be vigilant about valuations, PM says

Why the drop in business insolvencies isn’t good news

Demand for electric vehicles is rising, while e-commerce must adapt to a post-pandemic world

Regulatory scrutiny is set to intensify

Excluding capital gains from income gives "a truer picture" of who pays the tax, according to a Fraser Institute report

Mantle314's platform is currently being tested by 15 public companies