This article appears in the March 2020 issue of Advisor’s Edge magazine. Subscribe to the print edition, read the digital edition or read the articles online.

The shift toward passive investing has put significant proxy voting power into the hands of relatively few managers.

BlackRock, Vanguard and State Street collectively are the largest shareholders for 88% of companies in the S&P 500 (they own about 20% of the index), according to a 2017 paper published in the journal Business & Politics.

Interest in environmental, social and governance issues place passive managers’ influence in a new light. How will this clout be used — and should passive managers even vote?

Asset managers have a fiduciary responsibility to vote in the best interests of beneficial owners. As someone who has read every proxy circular and voted every share for funds within my responsibility, I know how much time is involved. Further, voting against management can earn you a trip to the executive floor to discuss “best interests.”

The chair of a public multinational company once threatened to resign from the board of the financial institution for which I worked unless I reversed a vote. (I withdrew the proxy but refused to vote with management).

Globalization and social challenges make shareholder vigilance more important than ever. Pension plans, ETFs and mutual funds have long been passive shareholders, voting as directed by two firms that together control 97% of the North American proxy advisory market: Institutional Shareholder Services (ISS) and Glass Lewis (which is owned by the Ontario Teachers’ Pension Plan and the Alberta Investment Management Corp.).

ISS and Glass Lewis provide convenience and analysis but, in my experience, generally defer to incumbent management. And a study of 175 investment managers with $5 trillion in assets, conducted by the American Counsel for Capital Formation, found the managers followed ISS recommendations 95% of the time.

Proxy advisors also consult with companies about improving ratings on issues such as executive compensation, prompting the Securities and Exchange Commission (SEC) to recommend greater transparency over conflicts.

There are costs for asset managers to oversee the companies they own. Shareholders owning more than 5% of a U.S. public company who are looking to exert influence must file Form 13D with the SEC within 10 days of a position change, which is expensive; those who are only investors file a Form 13G once a year.

Passive managers prefer to use 13Gs, which do not preclude opposing management on excessive pay or over entrenched or interlocking boards. But nobody gets a bonus for opposing or abstaining. BlackRock’s stated preference is to engage management teams directly through meetings. But proxy voting is more tangible and transparent. 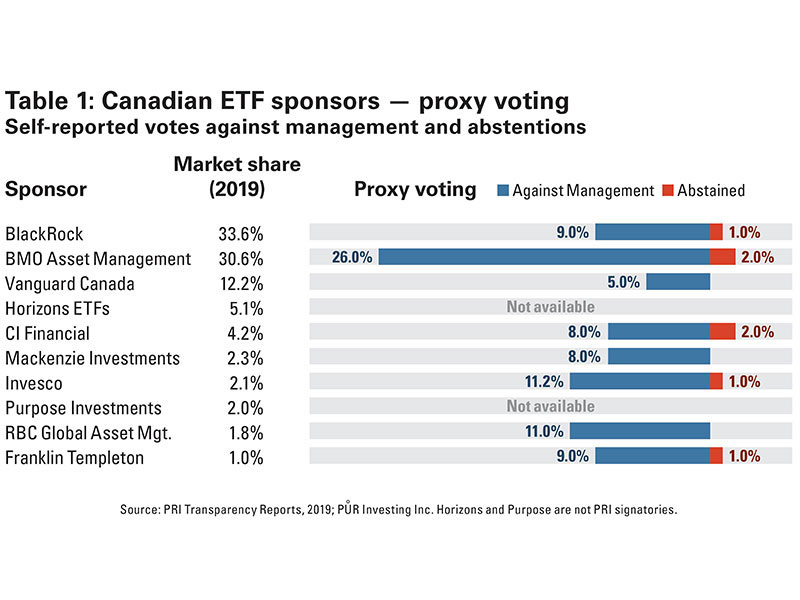 Governance for good or evil

The Business Roundtable, a group of 200 CEOs chaired by JP Morgan’s Jaime Dimon, created a stir by including employees, customers and communities — in addition to shareholders — as “stakeholders.”

Given income inequality, climate instability and populist challenges to capitalism, this perspective is interesting. BlackRock chair Larry Fink has committed his firm to sustainable investing, embracing “green” values in his 2020 letter to CEOs.

As a major shareholder, BlackRock believes it encourages companies to adopt environmental standards through the Task Force on Climate-related Financial Disclosures and the Financial Accounting Standards Board. Time will tell.

Concentrated ownership through passive funds could also lead to abuse. A manager owning all companies in an industry, such as airlines or telecommunications, could maximize returns by discouraging competition and keeping prices high.

Passive managers have downplayed their influence, claiming that director and other votes are decided by margins greater than 30%, so even three 10% holders can’t change proxy outcomes. But if large shareholders can’t influence big business, how can smaller ones?

Passive managers can use their growing proxy power to positively influence corporations by making already public voting records more open to comparison and scrutiny. Passive proxy-power has the potential to be transformative in a world that needs it.

Sunlight, in the form of transparency and disclosure, can be the best disinfectant.

The passive funds were listed on the NEO Exchange

Where the sector goes from here

Geopolitical concerns could still hold the Bank of Canada back