Prior to 1991, business owners had limited opportunities to create their own pensions. This changed in 1991, when the tax rules were modified to allow for the rebirth of individual pension plans (IPPs). In brief, an IPP is typically a defined benefit (DB) plan set up and funded by a small business owner or professional operating through a corporation that employs them.

IPPs can provide many benefits, including higher contributions than would be permitted to an RRSP (explained later) and the ability to create a lifelong pension.

With the proposed changes to small business taxation, the IPP is becoming more attractive. Life annuity income, which can be received from an IPP at retirement (plan-paid or where amounts are used to purchase an annuity from a life insurer), can be split with a spouse or common-law partner under the pension-splitting rules.

While we don’t have the full details of the changes that Finance Minister Bill Morneau is proposing with respect to the taxation of passive income, this potential negative tax consequence can be mitigated if the assets producing the passive income no longer form part of the corporation’s assets, and instead form part of any required company contributions to the IPP.

Despite all these advantages and the fact that IPPs have existed for nearly three decades, many people are not using them. This is due, in part, to incorrect assumptions about who makes a good candidate.

Many think that, for an IPP to be appropriate, the prospective member needs to be earning at least $100,000. This is not true. An older person with a long history of more modest earnings (e.g., $60,000 per annum since 1991) would still find an IPP very attractive.

The first baby boomer turned 65 in 2011. Business owners belonging to this group are now thinking about exiting their businesses, which also means there is a large pool of IPP candidates.

Who can have an IPP?

Given the many benefits of an IPP, the Department of Finance has put in place specific rules for plan members who are “connected.” As specified in the Income Tax Act (ITA), a connected person is generally someone who:

How much can they accrue?

To understand the rules for connected people, let’s first look at a non-connected member of a DB plan. A typical pension formula for this employee might be:

Many employers use the last five years’ earnings to calculate the FAE.

The 1991 legislation forbids connected people from using this formula. Why? Remember that small business owners or professionals operating through a corporation can choose to draw either dividends or employment income from their corporations. A business owner using the same formula as the non-connected person could draw a low wage in early years, and then bump up wages for the years used to calculate the FAE.

Instead, for connected persons, Finance requires that indexed average wages be used for calculating the pension accrual. In short, a connected person can only accrue a pension for years in which there is employment income. However, for purposes of calculating the pension accrual (and thus pension funding), these wages are indexed in the same manner as the year’s maximum pensionable earnings (YMPE) for CPP.

What can be included as wages?

Only employment income can be used for pension accrual purposes. Management fees reported on a T4A slip and dividends cannot be included.

The plan document for the IPP will define wages, calling them “compensation” or “covered earnings.” The ITA allows compensation to include most amounts taxable under the employment provisions of the ITA (i.e., sections 5 and 6). Bonuses and taxable benefits would be included, as would amounts allocated under an employee profit sharing plan on a T4PS slip.

Compensation from both the company sponsoring the IPP, as well as other participating employers, can be included. In certain situations, amounts paid by predecessor companies can be included as well.

Earnings can only be included if earned through a corporation; self-employment earnings prior to incorporation cannot be.

Impact of the plan member’s age 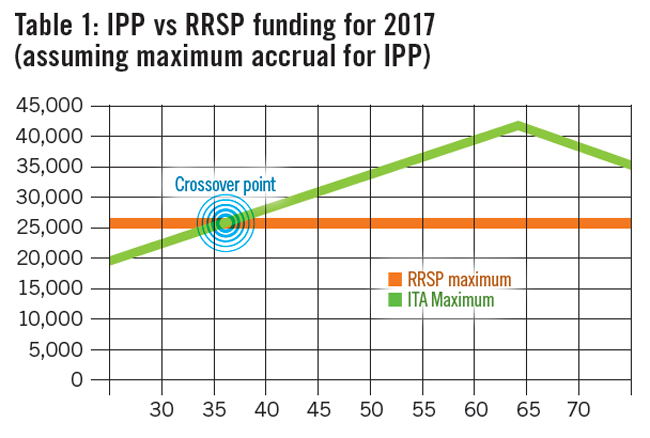 Not all prospective plan members earn compensation of $145,722. If they earn less, they can take advantage of what’s called the proportional advantage. Older plan members enjoy funding advantages even if they do not earn maximum wages (see Table 2).

Let’s see how that works.

The impact of indexed wages

Samuel’s 1991 wages will be indexed, as per the following calculation:

His 1992 wages would be indexed as per the following calculation:

*replace with YMPE for year the wages were earned

The fact that today’s YMPE is 1.8 times that of 1991 drives up the pension accrual and, therefore, the tax-deductible contribution the employer may make to the IPP.

Samuel’s company can potentially make a significant tax-deductible contribution to his IPP. How this would be funded (company contribution versus a transfer of RRSP assets) depends on the amount of Samuel’s RRSP/RRIF balances and his RRSP room. If part of the $607,266 liability is satisfied through a transfer of RRSP assets, this RRSP-to-IPP transfer is not deductible to either the plan member or company. The company will only be able to deduct the contributions it makes in its fiscal period or within 120 days from the end of the fiscal period.

What if Samuel had been drawing wages equal to the YMPE since 1991? Many accountants recommend this course of action so clients can maximize their CPP retirement pensions.

Consider the example of Martha, who had been drawing wages equal to the YMPE since 1991, and is also aged 64. YMPE in 1991 was only $30,500. However, the accrued liability for Martha as of Jan. 1, 2017 (were an IPP to be established) would be $410,048. Again, how this would be funded (company contribution versus transfer of RRSP assets) would depend on the amount of her RRSP/RRIF assets and RRSP room.

If someone is able to accrue the maximum pension every year starting in 1991, the pension accrual (liability) on Jan. 1, 2017 would be significant.

Even if part of the liability had to be settled with a transfer of RRSP/RRIF assets, the deduction available to the employer could be significant. The 2017 current service cost is not included in the above figures.

Given the age and compensation factors, it’s clear that appropriate IPP candidates do not necessarily have to be high earners. They can be earning a modest amount—perhaps only equal to the YMPE—and still have significant accrual room if they are old enough and have many years of service. While advanced age, high wages and a considerable period of service will produce the greatest liability for the plan, the other appropriate candidates that we have highlighted in this article need to be identified.

An IPP should be viewed as an arrangement that will be in place for the long term. The IPP is more complex than a defined contribution arrangement (e.g., RRSP or defined contribution RPP) and does come with administrative costs. Companies considering these arrangements also need to appreciate the funding obligations. They may not be appropriate for companies that anticipate having challenges funding the arrangement. (While some hybrid plans purport to address the funding challenges, the added complexity of such an arrangement needs to be understood by the plan sponsor.)

We recommend seeking specialist advice when considering an IPP for clients.

How can you incorporate ESG into portfolios?

Luxury vehicle tax to bring in less than $800M over five years: PBO

Parliamentary Budget Officer estimates the tax will reduce vehicle sales by a much greater amount, however

Allegations involved trading ahead of a planned acquisition by Amaya Gaming

Across the industry, there were retirement announcements and an advisor move

The bank's wealth management arm earned $169 million in the quarter, up 3% from a year ago