Home Advisor’s Edge September 2019 Your client wants to leave her defined benefit pension. How can she turn it into cash?
Lea Koiv and Alexandra Macqueen 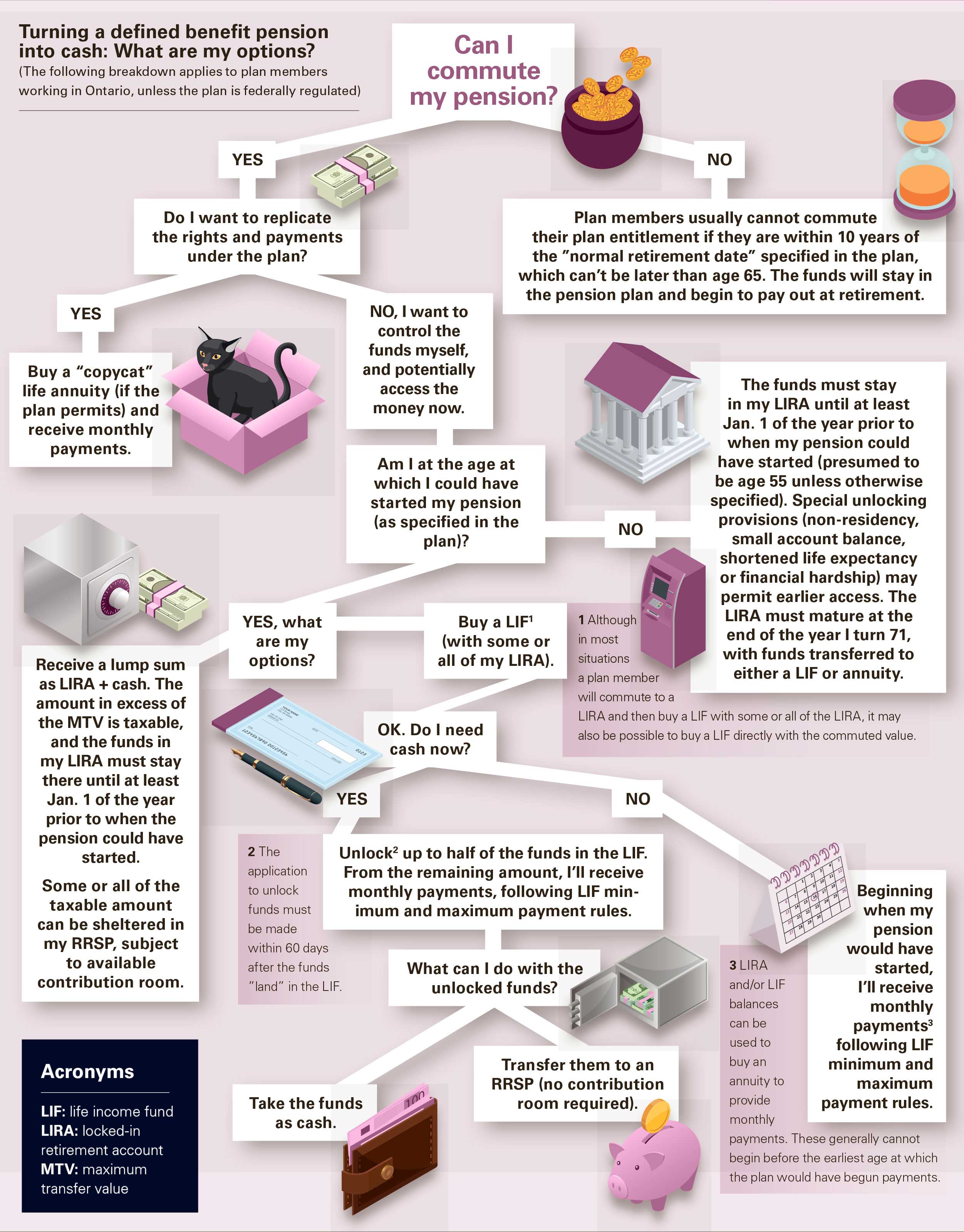 Cornelia, age 54 and working in Kitchener, Ont., is leaving her job and wants to cash in her defined benefit (DB) pension.

Here’s the catch: funds in DB pensions are generally viewed by the Income Tax Act and pension legislation as intended to provide cash flow in retirement, and not before. (For Cornelia, the Ontario rules apply, since she works in Ontario and her plan is not subject to the federal rules.) It is challenging, as a result, to remove funds before retirement.

To do so, Cornelia first needs to find out whether she can commute her pension, the rules for which will be set out in the text of her pension plan. Normally, plan members are not able to commute their pension if they’re within 10 years of the normal retirement date (NRD) specified in the plan, which cannot be later than age 65. For Cornelia’s plan, the NRD is 62, but her plan permits her to commute her pension even though she is within 10 years of the NRD.

Creating cash flow from a LIRA

Cornelia directs her plan administrator to commute her plan to cash. Part of her commuted value is transferred to a locked-in retirement account (LIRA), and the remainder—the amount exceeding the maximum transfer value (MTV) set by the Income Tax Act—is paid to her in cash. Since she has RRSP contribution room, she can shelter some of the amount exceeding the MTV in her RRSP. Her employer also might be willing to transfer funds directly from the pension to the RRSP.

Once the money is in the LIRA, Cornelia wants to use it for cash flow. Cornelia’s plan allows members from age 52 onward to start their pensions. This means she can opt to buy a life income fund (LIF) with some or all of the amount in her LIRA. The LIF will give her monthly payments or could be used to purchase an annuity. The LIF funds cannot be transferred back to a LIRA.

Cornelia may choose a LIF over sticking with the pension so that she has control over the assets, rather than relying on the pension fund. The LIF also affords a one-time “unlocking” option, which means she can “unlock” up to half the value of her LIF and move those funds directly into an RRSP (no RRSP room is required) or take the amount as taxable cash. She must apply to unlock the funds within 60 days of when the funds go into the LIF.

Cornelia chooses to unlock half her LIF. Since she’s 54, she would already have been entitled to a pension, (though it would have been less than if she were 62). As a result, she can draw an income from the amount remaining in her LIF immediately, following the LIF minimum and maximum rules.

The payments are based on the balance of the LIF on each Jan. 1 the plan is open (except in the year the LIF is established, when the minimum is calculated without taking into account the amount that’s unlocked).

Staying the course with a LIRA

Cornelia’s cousin, Edwina, works in Mississauga, Ont. Edwina also wants to terminate her employment and access the cash in her DB pension, as she is concerned about the plan’s solvency. Edwina is 51 and her plan has an NRD of 63, so she is able to commute her pension.

Since Edwina would have been able to draw a pension from her plan only at age 53, she can’t buy a LIF yet. The funds transferred to the LIRA must remain in the LIRA until at least Jan. 1 of the year prior to when her pension could have started.

If Edwina runs into financial hardship before then, she may be able to unlock some of the funds in her LIRA earlier. Similar to a registered retirement income fund (RRIF), her LIRA must mature by the end of the year in which she turns 71, and must start to pay income thereafter, again based on the LIF minimum and maximum rules.

The process of moving funds out of a DB pension plan to create cash flow before retirement is complex. Clients and advisors need to appreciate the larger implications of leaving a DB environment, such as the loss of guaranteed life-long income (which can be replicated using a copycat annuity) and any inflation indexation provisions contained in the plan. As commuting is a one-way option—there is no ability to return to the DB plan should events not transpire as hoped—advisors should take a client’s full financial picture into account versus narrowly focusing on creating current cash flow.

The organization wants to improve lower-income earners' access to planning

T4A errors should be reported right away

Many are changing due diligence or narrowing their investment universe

Slowing growth a ‘good thing’ when economy is overheated: Macklem

How to invest for the bond rebound

Heading into RRSP season, many investors are shying away from markets