This article appears in the February 2020 issue of Advisor’s Edge magazine. Subscribe to the print edition or read the articles online.

In the 2019 federal budget, the government proposed a new type of tax-sheltered registered income plan: the Advanced Life Deferred Annuity (ALDA). ALDAs would allow a retiree to transfer up to 25% of their RRIF account value (subject to a CPI-indexed dollar limit of $150,000) to a deferred life annuity, where annuity payments can be deferred until age 85. (RRSPs, deferred profit-sharing plans, pooled registered pension plans and defined contribution pension plans all qualify for ALDAs. Here, we are focusing only on RRIFs).

The ALDA’s purpose is to reduce the risk of running out of income late in life, should the RRIF portfolio deplete. Can it accomplish this?

Here, we look at two different scenarios. In both, the retiree is 65, has $500,000 in registered plans and wants income until age 95 — a 30-year time horizon. Both retirees are invested in balanced portfolios of 40% equities (using the S&P/TSX as an equity proxy) and 60% bonds. The portfolios are rebalanced annually.

In both scenarios we convert the RRSP portfolio partially to a RRIF at age 65: enough to provide the required income until age 71, when we convert the remaining RRSP — as required by law — to a RRIF. This helps to minimize income taxes on the surplus portion of withdrawals while increasing tax-deferred assets in the RRIF account, and possibly reducing OAS clawback prior to age 72.

Here’s the difference. In the first scenario, the retiree — Indira — already has too much income from other sources. She needs only $15,000 per year from her $500,000 RRIF: a 3% initial withdrawal rate, which is easily sustainable for a 30-year time horizon. The second retiree, Hank, needs $20,000 per year. This is a 4% initial withdrawal rate, which many advisors believe is sustainable for a 30-year retirement period.

We’ll use an “income carpet,” which shows the income received as a percentage of income required, to observe the ALDA’s impact. The income carpet is a colour-coded income level in real dollars for every year between 1919 (the first available data for S&P/TSX) and 2000, representing a 30-year retirement starting in each year.
Here’s what the different colours on the income carpet mean.

Purple: the minimum required withdrawal from the RRIF portfolio is larger than what the client needs; therefore, the client has surplus income for that starting year at that age

Blue: the inflation-adjusted income for that starting year and for that age is exactly what the retiree needs

Green: the available income is between 90% and 100% of required income

Yellow: the portfolio provides between 50% and 90% of required income

Orange: the portfolio provides between 0% and 50% of required income

Red: the portfolio is totally depleted

There are no ALDA products currently available in the marketplace, so we can only guess the payout rate. For an ALDA purchased at age 71 — with payments starting at age 85 and no CPI indexation of payments, a refund of premium guarantee, and an option to start payments at an earlier age at the owner’s request (with a lower payout rate) — we estimated, loosely, a 12% payout rate.

Scenario 1: When there are plenty of assets in the RRIF

Income Carpet 1 uses historical market data to show an “aftcast” of RRIF income without an ALDA for the starting years 1919 to 2000. On average, Indira had to withdraw 58% more dollars than she needed during her retirement. This happened because the minimum mandatory withdrawal amounts were larger than her needs. This surplus income created higher income taxes and increased the chances of a larger OAS clawback (which is not included here for reasons of simplicity).

Income Carpet 1: Plenty of assets in RRIF, no ALDA 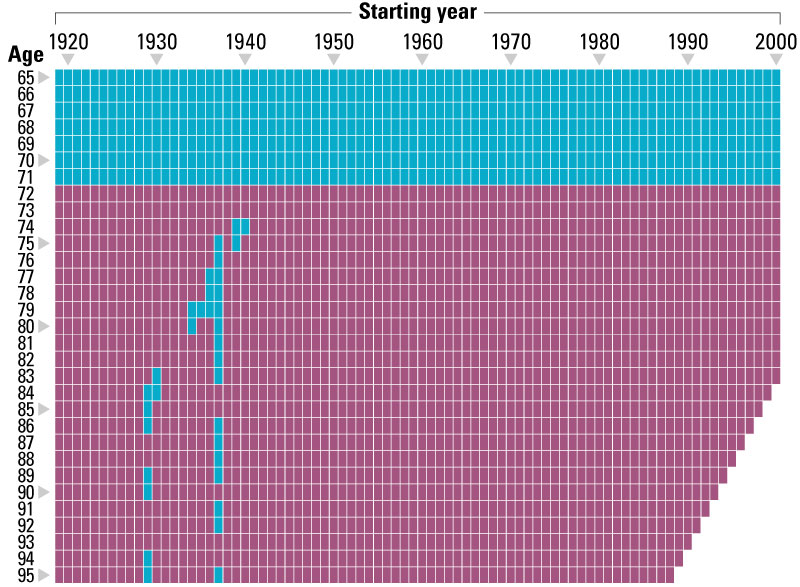 When you see a lot of purple on the income carpet, the retiree is likely a good candidate for an ALDA, which can help to reduce excess taxable income until age 85. ALDAs also provide a continued income after a RRIF portfolio depletes if its owner lives longer than expected.

Let’s look at how an ALDA would impact Indira’s account. After transferring the maximum allowable amount to an ALDA at age 71, her RRIF account value is reduced by that same amount. This decreased the dollar amount of minimum mandatory withdrawals from the RRIF. On average, with an ALDA, Indira had to withdraw only 35% more income than she needed during her life, compared to 58% without the ALDA (see Income Carpet 2).

Income Carpet 2: Plenty of assets in RRIF, with ALDA 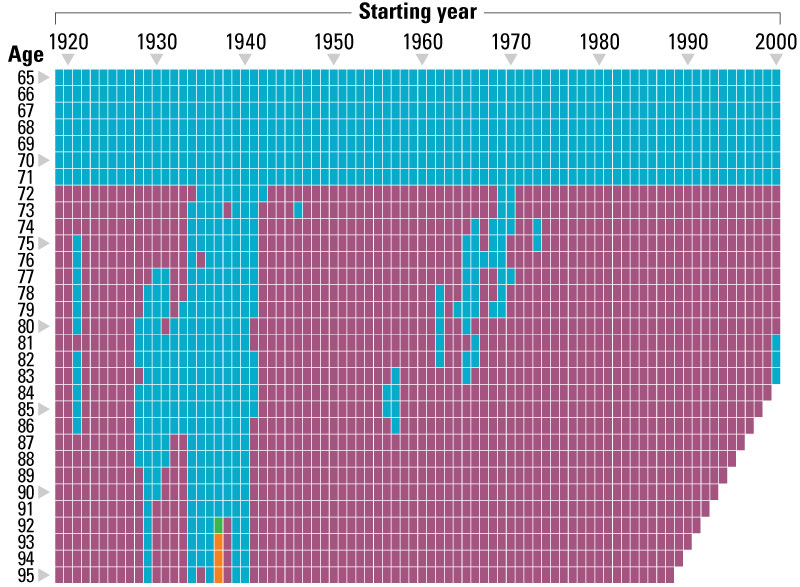 Note that there was one starting year (1937) out of 81 where income was insufficient after age 91 (indicated by one green pixel followed by three orange pixels). This happened because money in the RRIF wasn’t able to grow sufficiently. The RRIF withdrawals became excessive (12% at age 80) while waiting for ALDA payments to start. By age 91, income was not sufficient to provide what Indira required.

This outcome is preventable. After buying the ALDA, if the RRIF withdrawal rate exceeds 7% prior to age 80, or 9% after, Indira could start the income stream from the ALDA immediately rather than waiting until age 85. This would mean a slightly lower income payment from the ALDA, but she would reduce the excessive drainage of the RRIF portfolio and improve its outcome in such low-probability, extreme instances.

Scenario 2: When assets in the RRIF are not enough

Since both scenarios have the same dollar amount — $500,000 — you might ask why I say Scenario 1 has plenty of assets and Scenario 2 does not. What matters is not how many dollars a retirement portfolio holds, but how fast it is drained. In this scenario, the initial withdrawal rate is 4%. This is one-third larger than withdrawals in Scenario 1: $20,000 per year versus $15,000 per year. The income carpet for a required initial withdrawal rate of 4% without an ALDA is displayed below. 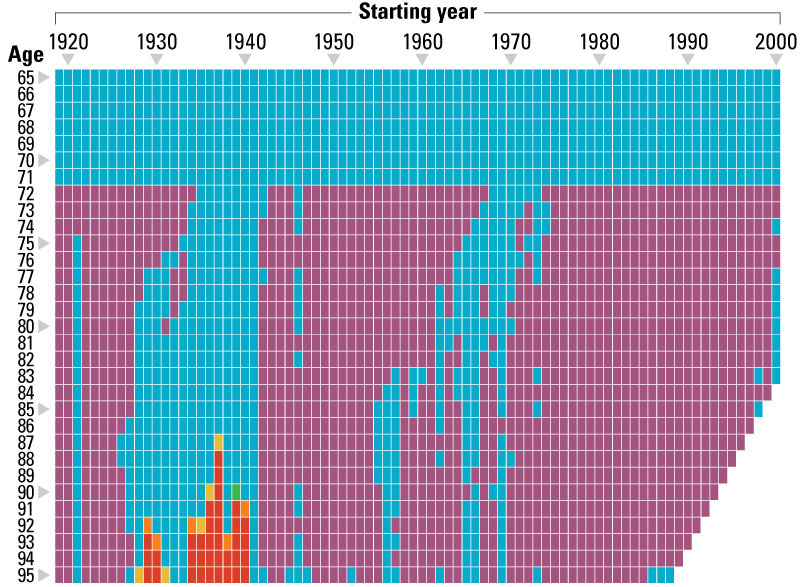 However, don’t be blinded by the abundance of purple pixels; the red pixels are most important. There was a 13% chance that the RRIF portfolio would be exhausted by age 95. Specifically for the starting year 1937, the portfolio depleted at age 87. If income from the RRIF was for essential expenses, this would be an unacceptable plan. Always keep in mind that the primary objective in retirement income planning is sustainability of lifelong income. Until this objective is properly addressed, topics like estate value or income taxes are irrelevant.

Can an ALDA help? Notice the abundance of orange pixels in Income Carpet 4, below. As it turns out, in these orange areas, the average combined income after age 82 was only 21% of what the retiree needed. This would definitely not be acceptable for essential expenses.

If this income is for essential expenses, neither choice, with or without an ALDA, would be acceptable. If the income was for discretionary expenses, it would be an easy choice: buy an ALDA for tax deferrals. 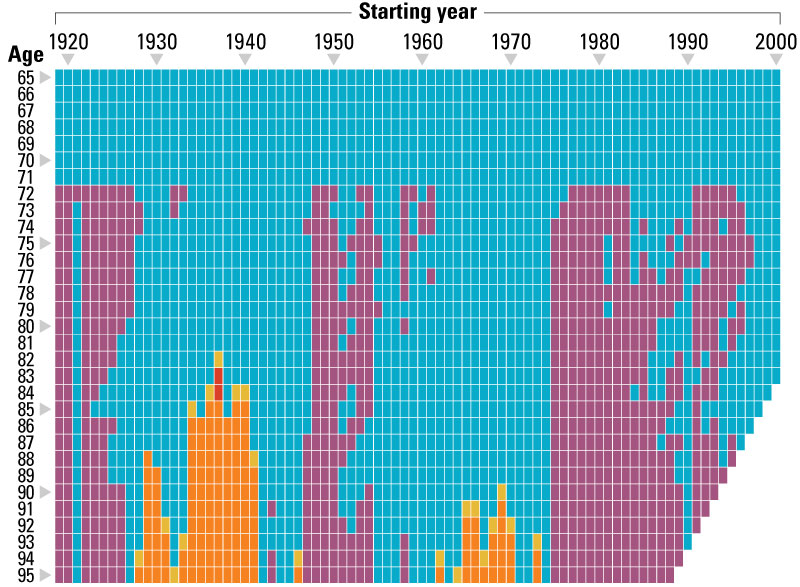 Keep in mind, these income tables and conclusions need to be revisited after ALDA products become available in the marketplace. Stay tuned.

Providing benefits is a significant cost for employers

Snowbirds leave insurance up in the air

The insurer will stop accepting new business for four non-cancellable disability products as of Sept. 30

The acquisition will more than double the size of Sun Life's U.S. employee benefits business by revenue

Fed lifts rate by quarter-point and signals more hikes ahead

``It would be very premature to declare victory," Powell says