For 20 years, reports from the Office of the Chief Actuary of Canada (OCA) have repeatedly indicated that the Canada Pension Plan (CPP) is sustainable over a 75-year projection period.

In the early 1990s, Canadian demographic trends were making the CPP’s “pay-as-you-go” contribution model unsustainable. To remedy this, the combined contribution rates by employees and employers were gradually increased from 4.4% in 1990 to 9.9% in 2003. This created a cash-flow surplus between 2000 and 2021, with contributions exceeding expenses. (CPP expenses include retirement, disability, survivor, death and administration.)

But after 2021, these expenses will exceed the contributions for the foreseeable future, creating a cash-flow shortfall.

The idea was to invest the surplus from recent decades through CPP Investments (CPPI), hoping this pool of money would grow large enough to pay the shortfall for the following 75 years.

Figure 1 depicts the surplus/shortfall balance. The surplus stage is marked as “accumulation” and the shortfall stage as “distribution.” The graph shows the actual surplus between the years 2000 and 2018. Years after 2018 show the forecasted shortfall from the OCA’s 2018 report, the latest one available at the time of writing. 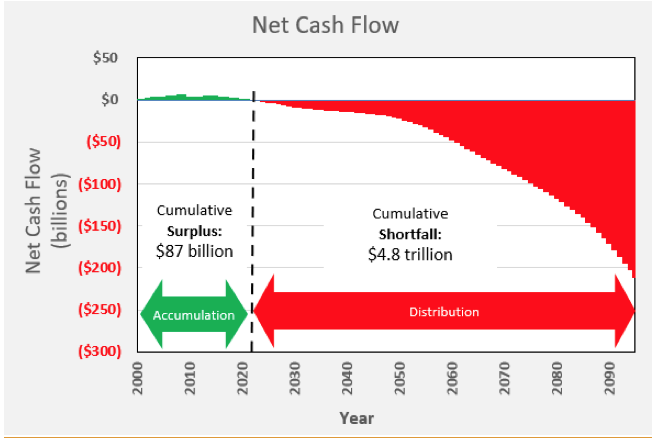 The key question is: Will the cumulative surplus cash flow of about $87 billion between 2000 and 2021, plus the growth of the CPPI portfolio, be sufficient to cover the cumulative cash-flow shortfall of about $4.8 trillion over the next 75 years?

According to the OCA’s reports, among all factors, variations in investment returns are the most influential. Therefore, I will only focus on investment assumptions. For the purposes of keeping it simple, this article covers only the “Base CPP” and not the recent “Additional CPP.”

CPP is one of the most expensive large pensions in Canada. A 2016 Fraser Institute report found CPP costs were higher than Ontario’s largest public pensions — significantly so in most cases. Table 1 summarizes CPP costs for the fiscal year-end March 31, 2019.

Table 1: Portfolio costs for the fiscal year ended March 31, 2019 (in millions of dollars)

If you want to compare CPP’s costs to a mutual fund, compare it to an F-class fund stripped of advisor fees. Furthermore, mutual funds are subject to HST/GST, where CPPI is not. To compare apples to apples, add about 0.1% to CPP’s MER for a fair comparison to a mutual fund. You will find that the MER of CPP, with about half a trillion dollars in assets, is about the same as most F-class retail mutual funds.

In its 2020 annual report, CPPI acknowledged that its costs have grown since 2006 when it moved to active management — an approach that presents “significant complexity and comes with costs.”

The fund only incurs “internal or external costs when we are sufficiently confident of enhanced long-term returns […] net of all costs,” the report said.

Using the OCA’s forecasted asset values, the total MER that Canadians will pay over the next 75 years (2020 to 2095) is about $865 billion (yes, that is with a “b”). This is equivalent to 18% of the forecasted cumulative shortfall of $4.8 trillion. And this MER must be covered by the growth of CPPI assets. The sensitivity analysis tables in the OCA’s reports do not include the impact of the MER, even though it is such an important factor.

Einstein reportedly once said, “Compound interest is the eighth wonder of the world.” We can add to it: “Compound MER is the greatest jinx in a distribution portfolio.”

To help us determine the CPP’s sustainability, we created a benchmark to reflect CPP Investments’ performance during the last 20 years. For the asset allocation, we used the reference portfolio in the latest CPPI report: 85% equities and 15% fixed income. We used the S&P 500 index for the equities proxy, as it allows for data going back to 1900 for the aftcast. For the bond portfolio yield, we used the historical 90-day T-bill interest rate plus 2%.

We varied the alpha — the standard measure for performance relative to a benchmark — until the asset values at the start and end points match. By trial and error, we achieved this when alpha equals 3.1%. This means, on average, the equity portion of CPPI outperformed the S&P 500 index 3.1% annually between 2000 and 2020. This is depicted in Figure 2. 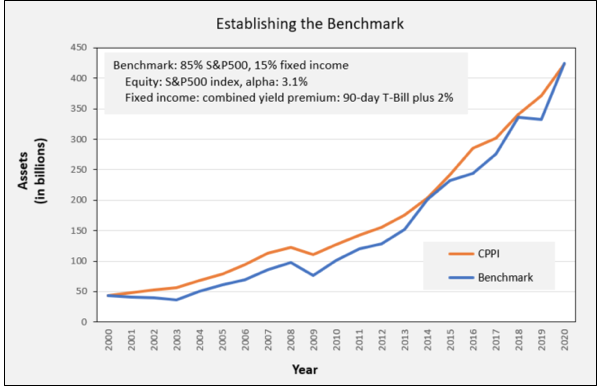 The CPPI has a lower volatility than its benchmark. This is mostly because a significant portion of its holdings are private investments. These are appraised much less frequently than publicly traded investments, and their valuations can be subjective. The appearance of lower volatility does not necessarily mean the portfolio carries a lower risk.

Now, we have a benchmark that reflects the last 20 years’ performance with an 85/15 asset mix. The equities proxy is the S&P 500 index with an alpha of 3.1%. Its fixed-income portion provides a yield premium of 90-day T-Bill plus 2%. Now, we can proceed to the aftcast.

Outcome based on CPPI benchmark

Our analysis of investment performance is based on a technique I developed about 20 years ago called “aftcasting,” an antonym to “forecasting.” Aftcasting displays a bird’s-eye view of all outcomes of all portfolios since 1900. It provides this with exact historical accuracy because it includes historical equity performance, inflation and interest rates. This preserves sequence of returns and correlations between each one.

We avoid using any type of stochastic modelling based on randomness (like Monte Carlo simulations). This is because randomizing eliminates any correlation between inflation, interest rates, and performance of stocks and bonds, no matter how many simulations you run. If you lose this correlation, then you also lose sequence of returns and inflation. 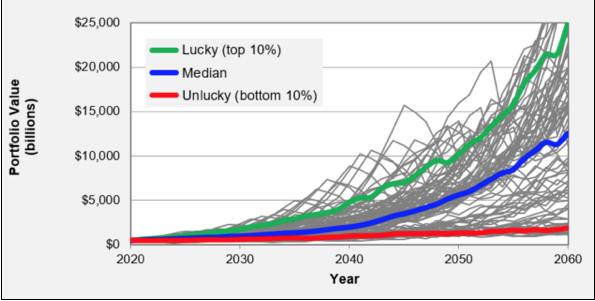 The good news: this aftcast indicates that CPPI can meet all its obligations, even under the “unlucky” circumstances. However, knowing that the accumulation phase is ending and the distribution phase is starting, can we safely assume that this stellar performance can continue for the next 75 years?

Outcome based on OCA’s assumptions

In case you are thinking that 3.1% alpha is too generous an assumption for the next 75 years, then wait — there’s more. The OCA forecasts that CPPI will provide a real return of almost 4% over the next 75 years. Figure 4 displays this aftcast.

According to this aftcast, in about 30 years the median CPPI portfolio starts growing vertically.

It is true that over the last century, the average real return of equities was slightly over 4%. However, our objective here is to uncover adverse outcomes and not average outcomes. Adverse outcomes occur when bad sequence of returns and inflation happen in a distribution portfolio. Markets do not beat inflation all the time, as the next section shows.

Before we start dreaming of owning the entire universe in a few generations, let’s look at market history.

Since the turn of this century, we had three major adverse market events: the high-tech crash, the financial meltdown and the pandemic. Each time, central banks reacted quickly and lowered interest rates. This helped the markets. But it came with a large cost: global total debt was US$87 trillion in 2000. At the end of 2020, it had climbed to $281 trillion. This will eventually become an inflationary factor.

The OCA assumes inflation of 2% for the next 75 years, citing both the Bank of Canada’s 2% inflation target and “forecasts from various economists [that] indicate an average increase in prices of 2.0% from 2019 to 2040.” During the last century, inflation was at or under 2% only 32% of the time — without today’s colossal debt load. There was never a streak of 2% (or lower) inflation lasting 75 years. So the OCA’s assumption of 2% inflation for the next 75 years has no precedent.

Higher inflation impacts the real rate of return. When inflation is higher, markets perform poorly. Table 2 indicates inflation rates and market performance during the long-term trends of the last century.

Once a portfolio switches from accumulation to distribution, inflation and sequence of returns become prominent determinants of its sustainability.

During long-term bullish trends, growth of equities handily beats inflation, as depicted in Figure 5. During the last century, this happened 43% of the time. This is also when many in the investment business confuse luck with talent.

Eventually, a bullish trend needs time to consolidate. This gives rise to a subsequent sideways trend. These consolidation periods spanned 49% of the last century. Figure 6 shows that return on equities is decidedly lower than inflation during these periods.

With these multi-year bad sequence of returns and inflation, 4% real return for the next 75 years is not realistic for a distribution portfolio.

Can we reasonably expect CPPI to outperform the benchmark index for the next 75 years? Before answering this, let’s take a closer look. The 3.1% alpha we calculated earlier is exaggerated because the benchmark portfolio is based on the S&P 500 index only and not S&P 500 total return.

The average dividend payout of the S&P 500 index is about 2%. Dividend income is not a result of talent. Dividends are part and parcel of equities investments, just like interest income is part and parcel of investing in bonds. After adjusting for dividends, alpha is not 3.1% — it is 1.1% on total return.

The portfolio also needs to pay the MER. Assuming it remains at 1%, deduct it from alpha. Now, we have a net alpha of 0.1%.

The assumption of 2% inflation for the next 75 years is also unrealistic. The average inflation rate for the last century was 3.3%, so we’ll use that for the aftcast. As a simple approximation, we increase the net cash flow projections stated in the OCA’s report by 1.3% for each year to adjust for higher inflation.

The resulting aftcast is depicted in Figure 7. The red line (bottom decile) indicates that CPP is not unconditionally sustainable for the next 75 years.

If the lucky (top decile) outcome occurs, the CPPI assets will reach $1 trillion in 2026, a very desirable outcome. In the median scenario, the asset value rises gradually by about $31 billion per year for the next 17 years and hits the $1 trillion mark around 2038. This would also fulfill the CPPI objectives.

The problem is the unlucky (bottom decile) outcome. Here, CPPI assets linger around the half-trillion mark (or lower) for the next 25 years and then decline to zero around 2060. In spite of the OCA’s “best estimate” forecasts, only time will tell where this goes in the next 75 years. 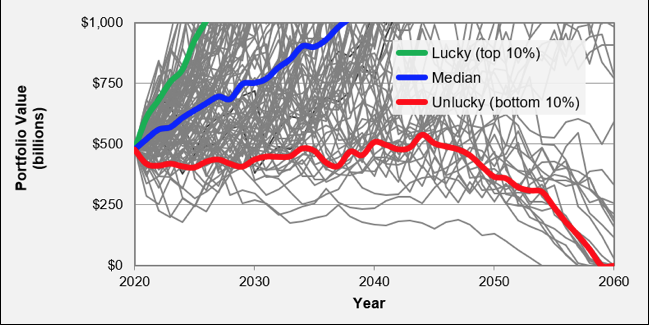 What can you do as an advisor?

For retired clients, there is no perceivable risk. No need to worry.

For working clients, keep an eye on CPPI annual reports. Ignore the glitter and just watch the asset value. If it starts appearing below the blue line (median), this can be a problem. Eventually, after the proverbial denial stage, the government might freeze annual inflation adjustments to CPP benefits. If CPPI asset value starts getting closer to the red line, the OCA would then go back to the drawing board; the government would then raise CPP premiums — likely by several percent.

Meanwhile, your clients should maximize their contributions to RRSPs and TFSAs. They should also consider portable pensions, which are separate from workplace pensions. The Saskatchewan Pension Plan — a lower-cost, voluntary, defined-contribution pension available to all Canadian residents — is one example. Portable pensions can help cover a client’s potential shortfall in essential and basic expenses during retirement, and the income is guaranteed for life.

Study finds post-work incomes are adequate for most new retirees

Fed lifts rate by quarter-point and signals more hikes ahead

``It would be very premature to declare victory," Powell says