Part 1 explored the importance of controlling costs when managing post-retirement or “decumulation” portfolios. Read it here.

Living longer presents two contradictions for investors: an element of the popular buy-hold-rebalance approach becomes more valid while also being rendered useless; and clients need to both protect their capital early in retirement while growing funds to avoid running out of money later.

Good news about living to 100

The 2011 census counted 5,825 centenarians in Canada. By 2061, roughly 100 years after many boomers were born, Statistics Canada forecasts the number of centenarians to reach 78,300.

This may be good news for advisors who rebalance to a fixed asset mix, because long time horizons are needed for this modern-portfolio-theory (MPT)-based approach to work effectively. Driven by net cash flows, long horizons and short market cycles can increase the probability that rebalancing will make back losses from previous cycles. But today’s retirees have a life expectancy of only 18.8 years and recent economic cycles have been longer—in the U.S., going from about four years until the 1980s to 10 years and counting for the current cycle. Canadian cycles have averaged 9.5 years since the 1970s.

Although stocks always seem to recover, retiring and drawing income from a portfolio without making deposits means less capital to recover losses. This is a different dynamic than during the accumulation phase when the buy-and-hold approach, although sub-optimal, can suffice. This insidious erosion is called “sequencing” or “sequence of return risk” and is the main reason professionals err toward conservative asset mixes leading up to and during retirement.

While conservative asset mixes may reduce the risk from volatility early in retirement, they’re not designed to offset the risk of living longer than expected or to adjust for periods of unanticipated decline or volatility later in retirement. Rebalancing to a fixed asset mix is inappropriate when managing a contingent liability, such as avoiding running out of money before dying or any other goals-based objective (see Advisor.ca/BetterRRSP).

Unless starting capital is sufficient to cover all anticipated withdrawal amounts for an indefinite period, post-retirement portfolios need a growth component.

Retirement specialists Wade Pfau and Michael Kitces proposed the counterintuitive strategy of an upward-sloping equity glidepath in a 2013 article. This approach could reduce the probability and magnitude of failure by starting conservatively—when sequencing risk would be most damaging—and building capital later when running out of money is the main challenge. This suggests an equity glidepath with an inverse camel hump representing de-risking as the retirement date approaches and re-risking about 10 years into retirement (see Chart 1).

Considering the investor’s interests, risks and timetable should be the key considerations in a retirement portfolio. Late in the accumulation phase and early into retirement, a sharp market decline exposes the investor to the most sequencing risk, thus supporting a more conservative approach during this period.

To avoid running out of money later in retirement, more risk— reflected in more equity exposure—can help. If the investor and advisor do not have access to sophisticated tools that take risk only when the odds favour the investor, or smart risk, this inverted camel strategy makes some sense. 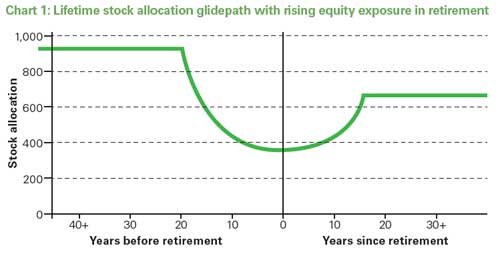 How to stay the course in tough markets

Planning for retirement amid persistent inflation

How advisors are positioning portfolios amid rising rates

Why are clients considering ESG factors?

How to stay the course in tough markets

Diversification, planning and time are an advisor’s best friends when volatility strikes

As central banks tighten, a portfolio manager explains the risks and outlook

Here’s the status of proposals that matter to your clients

Consider inflation when deciding when to begin CPP

The higher the inflation rate, the bigger the benefit of waiting