Despite the common belief that wealth is destroyed in three generations, dual-class shares (DCS) that perpetuate family and/or management control are supported by regulators, stock exchanges and corporate directors. Nearly one-quarter of U.S. IPOs in the first half of 2021 involved the dual-class structure, according to the Council of Institutional Investors.

Dual- or multiple-class shares give greater voting rights to some shareholders, typically founders. Other shareholders, sometimes with a greater economic investment, have either subordinated voting or no voting rights at all and, unlike with preferred shares, lack preferences in dissolution or liquidation.

No escape for index products 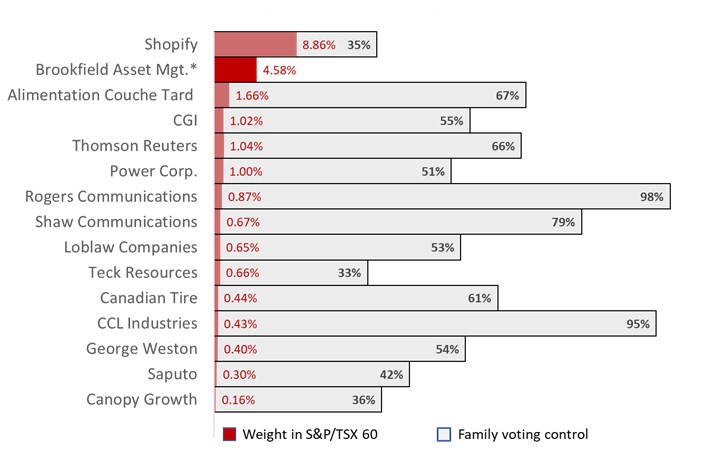 By comparison, DCS companies account for only about 12.7% of the S&P 500, but 7.5% are from four of the 10 largest positions: Alphabet Class A, Alphabet Class C, Meta Platforms Class A (formerly Facebook) and Berkshire Hathaway Class B.

Blackrock, Vanguard, State Street and 67 other managers with US$72 trillion in assets advocate for better governance and “one share, one vote.” The Council of Institutional Investors —which includes TD Asset Management, RBC Global Asset Management and BMO Asset Management — drafted a bill this year to restrict DCS listings on U.S. exchanges and requiring existing DCS companies to transition to a single-share format within seven years. Most of the 54 institutional members of the Canadian Coalition for Good Governance support a single voting class.

Canada, a haven for DCS companies relative to the U.K. or the U.S., adopted the structure in the 1980s, long before U.S. exchanges and regulators did.

The cases for and against DCS

DCS advocates point to how the share class gives entrepreneurial founders, particularly of new technology firms, a runway to realize their vision without concern for stock performance. Meta’s (Facebook’s) acquisition of Instagram without CEO Mark Zuckerberg consulting Meta’s board or unaffiliated shareholders is a cited example.

DCS detractors say the shares impair change, and shareholders suffer. That subordinated shareholders bear a disproportionate share of the enterprise’s economic risk without an alignment of voting rights is unfair. If founders want to maintain control, staying private is always an option. Brookfield Asset Management’s structure is worth consideration. Closely held Class B shares have the right to elect half the board, providing stability, but remain economic equals with Class A shareholders.

Proposed remedies include the outright ban of DCS companies from exchanges and indexes, as the FTSE 100 in London has done. Sunset clauses for transition to single class, while possibly expensive — Frank Stronach’s Magna payout is an example — would balance economic and voting interests. Alimentation Couche-Tard’s four founders give up their preferred voting status when they turn 65 years old this year, an example of a sunset clause established in 1975.

That ETF and other passive investors are required to own securities that they cannot easily sell increases the need for regulators to act. The Toronto Stock Exchange’s 1987 “coattail” provision for listed companies was the first in the world to protect minority shareholders by requiring they benefit from transactions on equal footing with controlling shareowners, but little has been done since. Banning DCS companies from major indexes may penalize performance — technology has been the main driver of this bull market — but the move could protect unsophisticated investors who don’t understand the issues or risks.

Academic studies are divided on DCS stock performance. Some studies show an advantage for closely held companies, but past performance is no indication of future results and the outperformance may not be attributable to their unfair share structure. Perhaps they could have done even better under a single-share arrangement.

Economic incentives entrench DCS companies. Corporate directors are likely loath to alienate themselves from future board positions. Exchanges want listing fees. Regulators have many competing priorities. The growing trend among new high-tech companies for disproportionate control is on a collision course with accelerating institutional support for enhanced governance initiatives. There may be blood.

Even though the dual-class structure is expensive to unwind on many fronts, better disclosure flagging the difference between economic and voting interests and exclusion from major indexes would give retail investors enough information to make better choices — or at least the chance to exit when the third generation assumes control.

Markets jittery but not bearish yet: NBF

Most advisors no longer bullish on TSX: Horizons survey

Where the sector goes from here

Advisors should stick with their strategies amid volatility

With rate increases on the way, some experts recommend tilting toward value

Markets jittery but not bearish yet: NBF

The yield curve signals that the overall trend should be up, despite volatility