The monetary and fiscal response to the Covid-19 pandemic comes with unprecedented costs.  The Bank of Canada’s balance sheet expansion — up to $543 billion in early August — has been stunning compared with its $81.2 billion response in 2008-2009.

It’s as if central banks wrote the following note to governments: “To our best customer, we are pleased to triple your credit limit” — only even this is a fantasy, since there is no credit limit.

“Currency-issuing countries can spend any amount of money they want” does not sound right, but it underlies modern monetary theory (MMT), a controversial framework for understanding economic principles that’s giving brain-cramps to mainstream economists and investment professionals.

Bridgewater Associates founder Ray Dalio has called MMT “inevitable.” Former Clinton Treasury secretary and Obama economic advisor Lawrence Summers called it “voodoo economics.” Nobel laureate in economics Paul Krugman said he “can’t actually quite make out what it is.” Former Bank of Canada governor Stephen Poloz said last year that MMT “is offering a free lunch, and most of us know there is no such thing.”

Governments can issue money to fund all obligations in their own currency. Fiscal spending or central bank initiatives are balance sheet entries offset by debt issuance and/or increased reserves. Governments service debts by refinancing or issuing more currency.

The implication is that governments with their own currency — such as Canada, the U.S., Japan and the U.K. — can’t be forced into default. Governments without currency-issuing authority —  including Eurozone members such as Italy, Spain and Germany, as well as Canadian and U.S regional governments — have  a problem. Such governments must balance budgets, get federal help or have the central bank buy their debt.

In essence, MMT claims that printing money to efficiently employ available “resources” is not inflationary and instead realizes the economic potential of the country.

MMT “green lights” fiscal spending and rejects the need to balance budgets. Its proponents — who include former Bernie Sanders adviser Stephanie Kelton, which explains some of the criticism MMT has generated — promote full employment.

Excess labour demand can be inflationary, as can fiscal or private sector action lacking adequate resources — like trying to produce surgical masks and ventilators quickly without adequate material or manufacturing capacity.

But low interest rates and a series of quantitative easing since 2008 has not produced anticipated inflation. Federal governments, it seems, can provide unlimited funding for aid and stimulus without risking real economy inflation if human and natural resources are available. This means that pandemic-induced expenditures are not necessarily inflationary.

Debt, deficits and asset inflation: Who will pay?

For MMT proponents, debt levels matter less than the cash flow to service them. Continuous deficit spending has not led to higher interest rates, inflation or reduced demand for non-government debt (Figure 2). 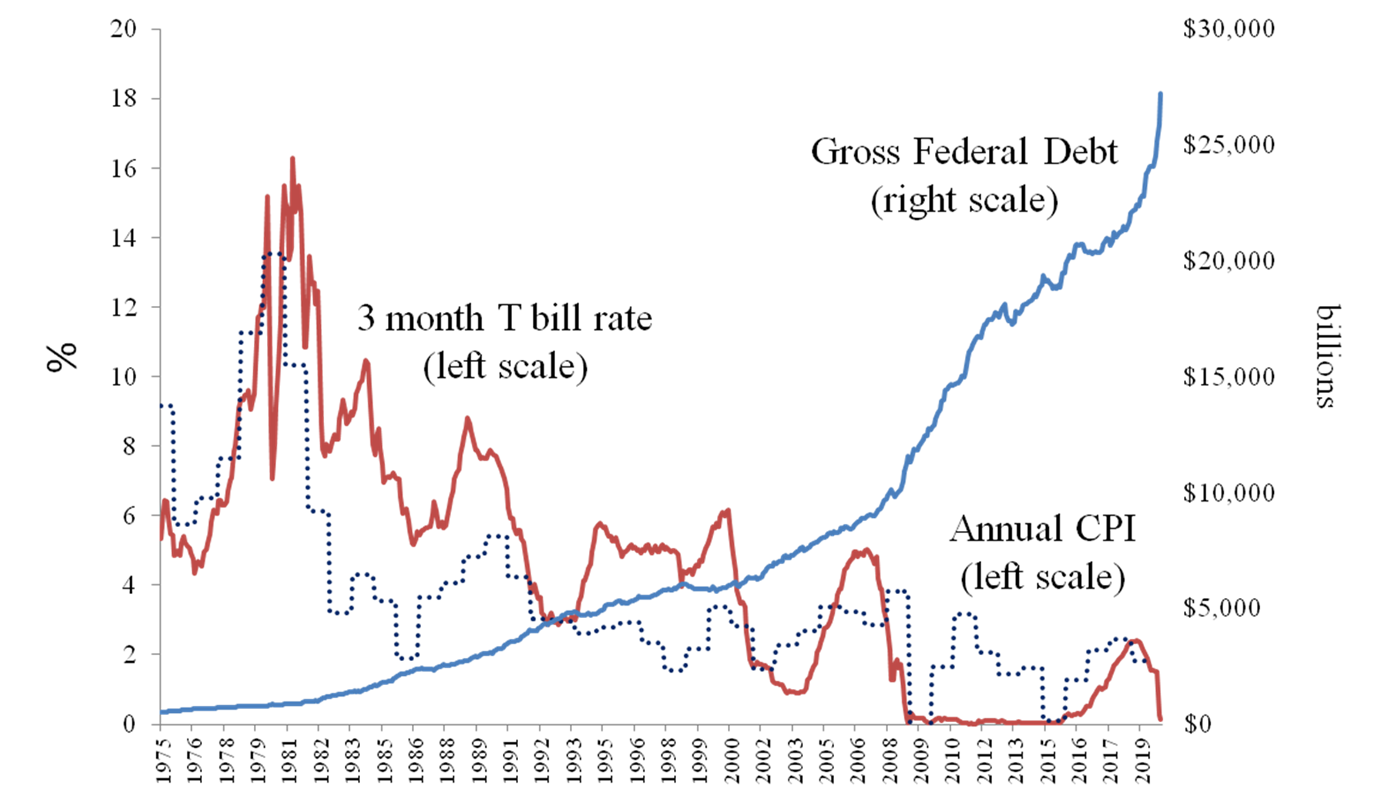 The Bank of Canada’s Government of Canada bond and Treasury bill holdings account for about 15% of all public debt in recent years; the Fed holds 11.0% of U.S. total debt. According to MMT, not only are there no consequences to this amount of debt as long as the spending is productive, but taxes and budget surpluses actually remove cash from the system, drive interest rates higher and impede growth. The Clinton government surpluses, for example, were followed by recession.

MMT assumes fiscal responsibility will be exercised, but politicians and civil servants often lack the incentives for good decision-making. A reserve currency like the U.S. dollar demands confidence and economic stability. The hyperinflation of Weimar Germany, Venezuela and Zimbabwe occurred in part because all had large foreign currency debts and misused resources.

After the Second World War, gross U.S. public debt peaked at around 120% of GDP. Some estimates predict that will be exceeded by 2023. The post-war years proved that with nominal GDP growth rates above bond interest rates, a growing economy can service debt faster than the service cost grows, meaning budget deficits can be run for extended periods of time. Since 1950, only during a period in the 1980s when the Fed was in disinflation mode did interest rates exceed the economy’s growth rate.

Ten-year bond yields under 1% in Canada and the U.S. suggest low expected inflation for the foreseeable future. With the exception of periods of stagnation or depression, the economy will likely grow faster than this. This means massive spending to support the economy during the pandemic and subsequent stimulus may not be as inflationary as expected, and is certainly more desirable than overburdening our healthcare systems with coronavirus.

A conundrum for economists and politicians is the future value of the balanced budget. If MMT is correct, economies have been handicapping themselves from efficient, full-employment resource management by insisting on dancing to a hollow song about a balanced budget.

MMT could be a key to unlocking resource and manpower potential for the next generation; at risk is a debt burden so large that a future global meltdown is all but assured.

Long-term effects of rate hikes will be ‘more powerful’ than people think: Poloz

Economy cools, but likely not enough for BoC

Long-term effects of rate hikes will be ‘more powerful’ than people think: Poloz

The increase was largely attributable to seasonal variations, as job vacancies typically peak in September

Economy cools, but likely not enough for BoC

How to prevent client complaints